Next parent rally to be held August 31

Posted on August 25, 2015 by marshalltownschools 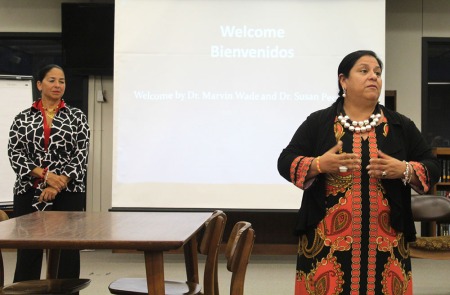 Marshalltown Schools will host another parent rally to seek feedback from parents and the community on Aug. 31. It will be led by Consuelo Castillo Kickbusch, right, and Marisa Rivera, left. It will be held from 5:30 p.m. to 8 p.m. in the media center at Marshalltown High School.

The Marshalltown Community School District is taking the next step in an increased effort to reach out for feedback from parents with another parent rally scheduled for Monday, August 31. The event will be held from 5:30 to 8 p.m. in the Marshalltown High School media center and is open to the public.

The rallies will be moderated by Consuelo Castillo Kickbusch and Marisa Rivera. Both are consultants with expertise in getting parents involved in how their children are educated. Both have visited Marshalltown and talked with parents already this summer in a total of four separate parent rally events.

The program will be presented in English, Spanish and in languages from Burma. Light refreshments will be available. Marshalltown High School is located at 1602 S. 2nd. Ave.