Posted on February 27, 2015 by marshalltownschools 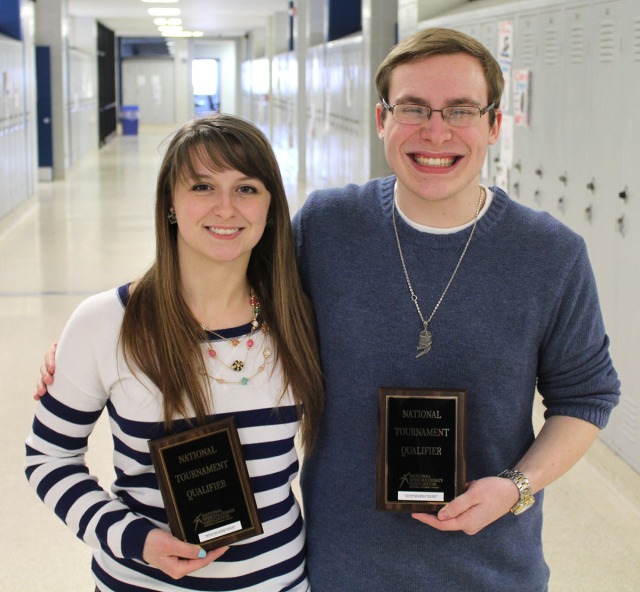 MHS students Megan Emerson and Chandler Fisher have qualified for the National Speech and Debate Tournament.

Marshalltown High School students Chandler Fisher and Megan Emerson have qualified for the National Speech and Debate Tournament to be held in Dallas, Texas June 15-19.

Fisher and Emerson qualified by placing in the top two for Duo Interpretation at the recent East Iowa District Tournament in Iowa City. Their performance has them acting out historically significant events utilizing a previously published script.

“They put together a wonderful performance,” said MHS coach Brianna Yates. “They work very well together.”

Fisher, a senior, has now qualified for nationals for the second year in a row.

Emerson, a junior, has qualified for nationals for the first time.

“This is our seventh consecutive year qualifying for nationals, and this year I have challenged our team to make it past the preliminary rounds,” said Dr. Janelle Hawk, director of forensics at MHS. “That means that they need to be in the top 60 after the end of Tuesday’s competition. I really think we can do it this year.”

While qualifying for the National Tournament is a great honor, it is also a burden on the speech and debate budget, Hawk said. The team is looking at ways to raise the extra funds needed to pay for the transportation and hotel fees. They will be holding tip nights at Pizza Ranch, and would welcome any and all donations from the community. Donations can be sent to Marshalltown High School, c/o Dr. Hawk, 1602 South 2nd Avenue, Marshalltown, IA 50158.