Posted on March 20, 2015 by marshalltownschools 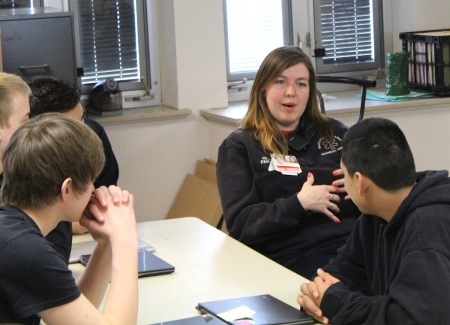 Marshalltown EMT/Paramedic Heather Becthold speaks to students at Miller Middle School during a career fair on March 18. The fair spanned four mornings at the school and drew dozens of area professionals, who spoke on their profession.

Miller Middle School hosted a career fair spanning four days this week, which drew dozens of area community members who presented to the students on their profession.

The fair was held over the course of four mornings at the school from March 16-19. A wide range of careers was highlighted including several from the healthcare field, mortuary science, insurance, business, media, retail and several others.

“It gives the students an opportunity to see many fields,” said Miller Principal Jacy Large. “It’s never too early to teach seventh and eighth graders what options they have in life.”

This fair provided activities for general education students at Miller while the I-ELDA (Iowa English Language Development Assessment) tests were given to English Language Learners at the school. The students taking the I-ELDA tests also had opportunities to learn about careers during the week.

Marshalltown School Board member John Johnson talks to Miller Middle School students about antique dealing during a career fair at the school on March 18.