Posted on January 7, 2016 by marshalltownschools

The Marshalltown High School Bobcat Marching Band traveled to Phoenix, Arizona for the 45th Annual Fiesta Bowl Parade during the holiday break. This marked the band’s eighth trip to Phoenix through the years. The band departed on Dec. 28 amid some difficult weather. Flight Group 1 with MHS Director of Instrumental Music Bret Lee made it to the Denver airport, but had the flight to Phoenix cancelled. After some work by United Airlines, the band finished their trip later that afternoon.

Flight 2 group with MHS Associate Band Director Brett Umthun saw both the flight to Chicago and the flight from Chicago to Phoenix cancelled. They were able to leave that afternoon by motor coach for a 32-hour marathon ride to Phoenix, arriving on the evening of Dec. 29.

After reaching their destination, the band enjoyed the Musical Instrument Museum, pizza and music at Organ Stop Pizza, pool time at the Kiwanis Wave Pool-Arizona’s largest indoor wave pool, horseback riding at Ponderosa Stables, Jeep tours around Sedona as well as numerous other events and meals.

At the Fiesta Bowl parade on Jan. 2, the band marched before more than 100,000 spectators, entertaining the crowd along the 2-mile parade route with music from “The Lion King.”

The band also assisted with the flag presentation for the Fiesta Bowl game and then watched Ohio State defeat Notre Dame on Jan. 1. The band arrived home the morning of Jan. 4 very tired after another great trip.

“The students represented our school and community, receiving many compliments from all the venues they attended,” Lee said. “The instrumental music staff is very proud of all the students and their behavior on the trip despite the bumps in the road they encountered.”

To view a video of band during the parade, click here and look for the band at the 14:08 time into the clip. 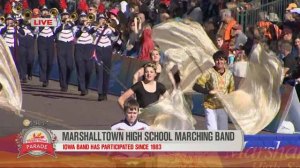