Posted on March 24, 2016 by marshalltownschools 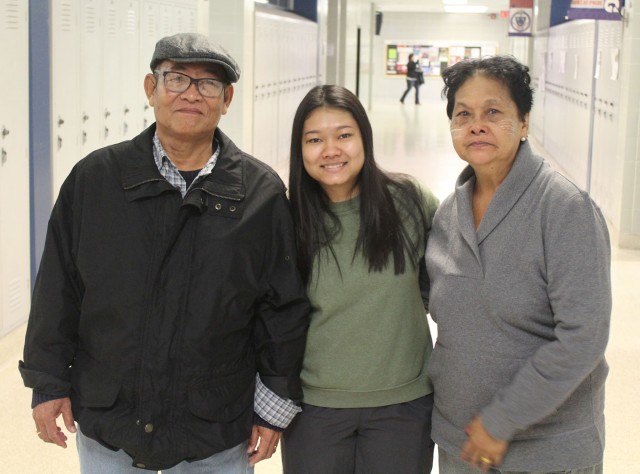 Mai Mome fled Burma as a political refugee with her brothers and had to leave her parents behind 10 years ago. She spent time in refugee camps in Malaysia and Thailand.

She eventually arrived in the United States and then in Marshalltown with her two brothers in March 2013 and enrolled in Marshalltown High School. Mai arrived knowing only how to speak Burmese and has worked her way into a National Honor Society student at MHS. The English Learner program at MHS has helped her through this process.

Earlier this month, she was reunited with her parents Aye Maung Maung (father) and San Mya Mya (mother) after 10 years apart as her parents were finally able to complete the immigration process to the United States.

At first Mai Mome didn’t recognize her parents at O’Hare Airport in Chicago.

“Finally, we saw them and we were all crying,” Mai Mome said. “It’s like a dream.”

Her parents are proud to see their daughter plans to graduate from MHS this May and wants to study nursing at Marshalltown Community College.

“They are happy and proud that I can go to high school and graduate and get a better life,” Mai said.

Mai has been trying to help other refugees get acclimated to the community because she knows how tough it is. She works as a community navigator and helps translate at the Ethnic Minorities of Burma Advocacy and Resource Center (EMBARC) in Marshalltown.
“I’ve been there so I know what they need and how they feel,” Mai Mome said of helping other refugees.

On March 18, Mai brought her parents to meet her science teacher at MHS, Mike Loupee. Loupee had glowing things to say about his student.
“I am proud of you,” Loupee told her as he met her parents.

Marshalltown High School senior Mai Mome talks to her parents and MHS science teacher Mike Loupee during a visit to the school on March 18.

Meri Edel, counselor:
“Mai Mome has been an exemplary member of National Honor Society. She completes many service projects for the community cheerfully and willingly. She is conscientious about attending meetings, or, if she cannot due to other commitments, she always comes and speaks to me face-to-face. She spent a semester in the Counseling Office as a pass runner for us and did a fantastic job. She is reliable, smart, kind and honest.

Samantha Nolte, English Learner teacher:
“She has definitely grown as a learner.”

Kathi Hale, English teacher: “She is in my English 12 class and talked often about her trip to pick up her parents. She was so excited to see them. Her responsibilities as a student are met with confidence and skill. She is the best!”

Brenda Sjoblom, math teacher:
“Mai Mome is in my Algebra 2 class and she does an exceptional job! She is super conscientious and goes out of her way to make sure she talks to me every day even if it is just a ‘see you.’ She advocates for herself and is not afraid to ask questions.
Last week when she knew she was going to miss class to make the trip to Chicago to pick up her parents she made up everything she was going to miss while she was gone before she actually left. That included a quiz and a test. She came up with the plan to come in the Friday afternoon of conferences and worked.
She always diligently takes notes during class and utilizes them while she is working on the assignment. Great work ethic!
I can’t say enough good things about Mai. She is a great girl.”