Posted on July 12, 2016 by marshalltownschools 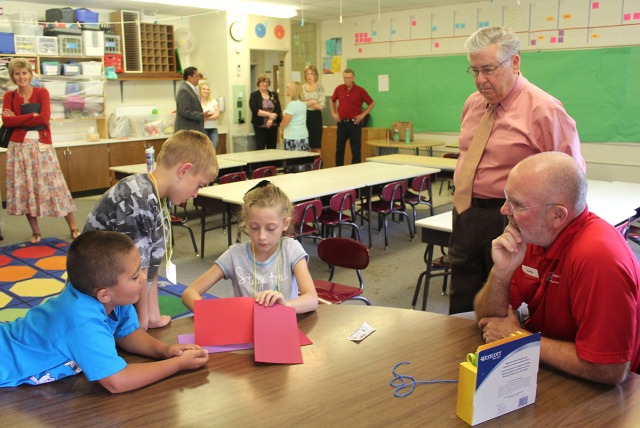 Students in the STEM camp work on a project while visitors look on at Anson Elementary School on July 12.

With a focus on science, technology, engineering and math, summer STEM camps will draw more than 500 students to elementary schools in the Marshalltown Community School District this summer.

The weeklong camps are open to any youth kindergarten through fourth grade and have been led by Iowa State University Extension staff, who have partnered with the Marshalltown Community School District, Marshalltown Regional Partnership, Marshalltown Business Education Alliance, Mid-Iowa Community Action and St. Francis School. The camps are being held at all six elementary schools in the district at different times this summer.

After a STEM camp was held for youth at Marshalltown High School last summer, the idea came about to expand it to all elementary schools in the Marshalltown Community School District this summer, led by ISU Extension.

Amy Pieper, county administrator at ISU Extension, said this summer’s program has been a big success.

“Students are just having a ball,” Pieper said. “It’s fun to see the education going on.”

The camp held a special open house attended by several community members on July 12 at Anson Elementary School, where ISU Extension staff gave updates on the progress. In one of the classrooms, students were building projects to cushion a potato chip from being cracked during tests. The curriculum for the camps is provided by the College of Engineering at ISU.

“We see this as more than just a summer STEM program, but continuing the program through the school year,” Pieper said.

David Barajas, CEO of the Marshalltown Regional Partnership, is a huge proponent of expanding STEM programming.

“It really enhances educational opportunities for all of our kids,” Barajas said.