Posted on September 21, 2016 by marshalltownschools 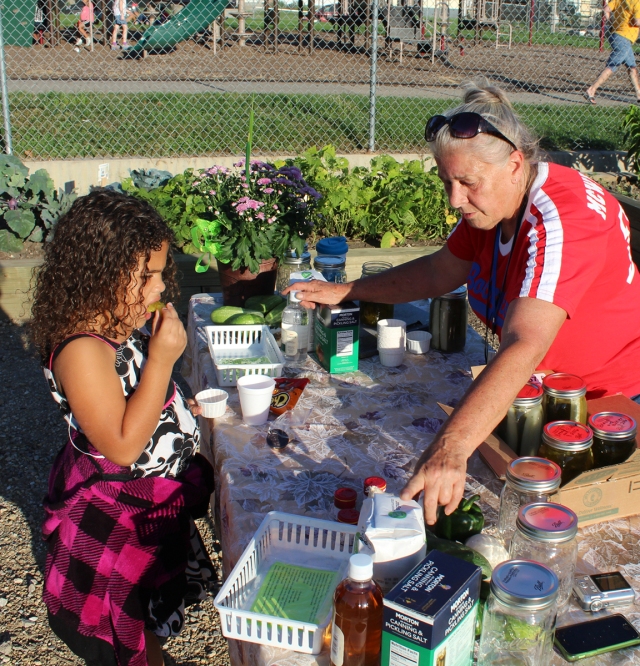 Rogers Elementary School first grader Destiny Tate tastes a pickle made from cucumbers at the school garden during an event at the school on September 20. Also pictured is Rogers staff member Ann Soetenga.

When Rogers Elementary School staff said they were serving up locally grown food on September 20, they really meant “locally grown.”

As in just a few steps away.

During its Family Learning Center night, staff served up food made from the garden located at the school.

There was salsa made from pepper, tomatoes and cilantro, coleslaw made from carrots and other vegetables and pickle slices made from the cucumbers from the garden.

While school staff did much of the work on the garden over the summer, that is going to change. Iowa State University Extension staff, who have been part of the building of the garden beds, were signing Rogers students up to be in the newly-formed garden club at the school.

Rogers paraeducator Ann Soetenga is one of the staff leaders of the project and she said it’s important for students to learn where their food comes from.

“Growing a plant from a seed is a marvelous way to learn the practical applications of math, science, nutrition, environmental concerns and pride in working hard and caring for something that will bloom to produce what you want,” Soetenga said.

She said the staff is more than excited about the future of this project, which was boosted by the interest of the students during the food presentation Tuesday night.

“We are not just excited, but passionate about where we are headed,” Soetenga said.