Posted on September 29, 2016 by marshalltownschools 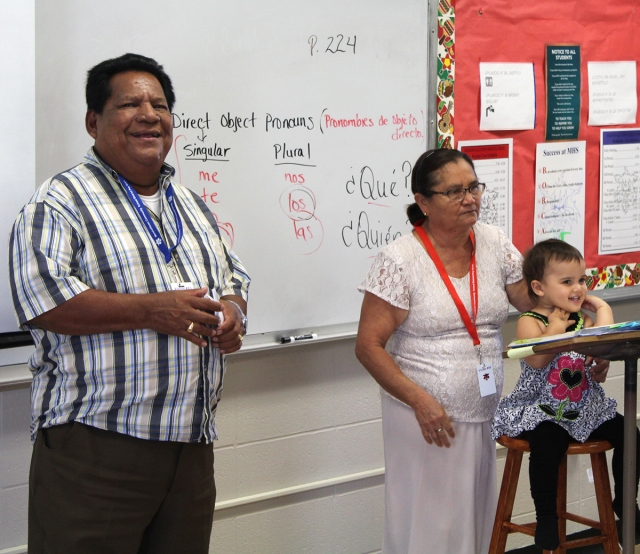 Carlos and Rosa Aleman are pictured with their granddaughter, Avyanna, at Marshalltown High School on September 29. Carlos and Rosa visited the Spanish classes taught by their son, Sadrac, to help the students practice their Spanish.

Two visitors from Nicaragua visited the Spanish classes taught by Sadrac Alemán at Marshalltown High School on September 29 as a way for the students to practice their Spanish. They were visitors known very well to Mr. Alemán as they were his parents, Carlos and Rosa Alemán.

Students in the Spanish 1 class played a game with numbers with the visitors while the Spanish 2 class students asked questions of Carlos and Rosa. Question topics ranged from favorite foods (Carlos said “all food”) to favorite sport (Carlos replied “baseball”). Carlos serves as a pastor in Nicaragua.

“The students really enjoyed learning about what life is like in Nicaragua,” Sadrac Alemán said.

Sadrac said his parents enjoyed experiencing a day at MHS and also were taken off guard by having to look up more than they expected.

“It surprised them to see how tall the students are here,” Sadrac said. “They see 14 year olds taller than me here.”