Wall of Honor completed at Roundhouse, thanks to dedicated staff members

Posted on May 17, 2017 by marshalltownschools

Jean Wilkens, left, and Tobi Greene are pictured in front of the Athletic Wall of Honor in the Marshalltown High School Roundhouse. The two spent many hours putting together the old photos of the all-state Bobcats, which have returned to the renovated Roundhouse.

Finishing touches to the Athletic Wall of Honor in the Marshalltown High School Roundhouse have been made and a project months in the making has concluded.

That project was led by Jean Wilkens, concessions manager, with the help of concessions worker Tobi Greene.

Wilkens gathered the old photos of the all-state Bobcats in the past, sent the damaged ones to Stalzer Photography, put on new labels and was able to mix new photos with old on the new and improved Wall of Honor.

“It was a project that needed to be done,” said Wilkens. “ I think it looks nice.”

So too does MHS Activities Director Rollie Ackerman. Due to the Roundhouse renovation, the all-state pictures went away for a time.

“People were hoping to see the pictures back up and when they went back up it brought back a lot of memories,” Ackerman said. “There’s that tradition of those photos being in the Roundhouse.”

Ackerman said it was a very daunting task to take the stacks of old photos, many in broken frames, and make sense of the project moving forward.

“Jean and Tobi’s efforts were invaluable,” Ackerman said. “It wouldn’t have happened this quickly without them.”

Jean would also like to thank John Stalzer and Mackenzie Duncan from Stalzer Photography for donating their time to the project to help brush up and print out the photos that were damaged.

“They were awesome,” Wilkens said.

Two more graphics were added to the project on May 17 by a sports graphics company to wrap up the project including a photo of the first-ever basketball game in the Roundhouse from February 12, 1966 and a graphic with the title “Marshalltown High School Athletic Wall of Honor.”

A photo of the first ever basketball game played in the Roundhouse from 1966 was one of the final additions to the new and improved Wall of Honor. 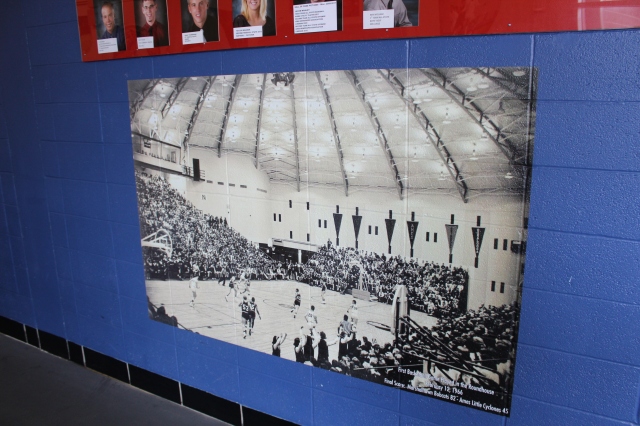