Posted on November 17, 2017 by marshalltownschools 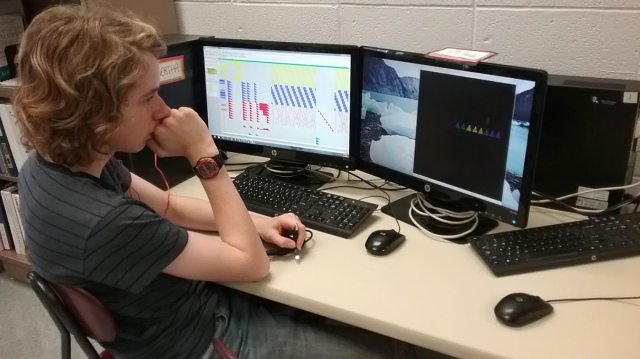 Marshalltown High School freshman Marek Jablonski works on programming his holiday light display. The light and music display will debut on November 24 at his family’s home at 1737 Country Club Lane in Marshalltown. This is the second year he has created a display.

For the second straight year, Marshalltown High School freshman Marek Jablonski is programming a holiday light display for his family’s yard at 1737 Country Club Lane near Elmwood Country Club in Marshalltown. He has spent many hours of programming so the lights and music match as part of his Extended Learning Program class at MHS.

This year’s display promises to be bigger and better with approximately 4,000 lights, 350 feet of extension cord, poles and tomato cages. In total, the display involved 25 minutes of music and eight songs.

The display is expected to start on Friday, November 24 and run most nights from 5 to 10 p.m. through New Year’s Day. There will also be a donation box in the yard, if visitors should choose to give, with all donations going to the House of Compassion.

Marek will be doing a demonstration on his holiday light display at the district-wide Family Coding Night, which is from 5 to 6 p.m. on Wednesday, December 6 at Miller Middle School.