Students awarded for their flag essays

Posted on February 3, 2018 by marshalltownschools

Two Lenihan Intermediate School fifth grade students were awarded and read their essays with the topic “What the American Flag Means to Me” on February 1 at the American Legion Post 46 in Marshalltown.

Victoria Corona won first place and Isaac Benscoter won second place. Both were awarded $25 and American flags for their home.

“Both of these students are extremely motivated and positive learners,” said Vanessa Engel, Extended Learning Program teacher at Lenihan. “I am very encouraged by how they not only researched about the flag, but they really tried to encompass what the flag means for themselves as well as millions of other Americans.”

Read their winning essays below: 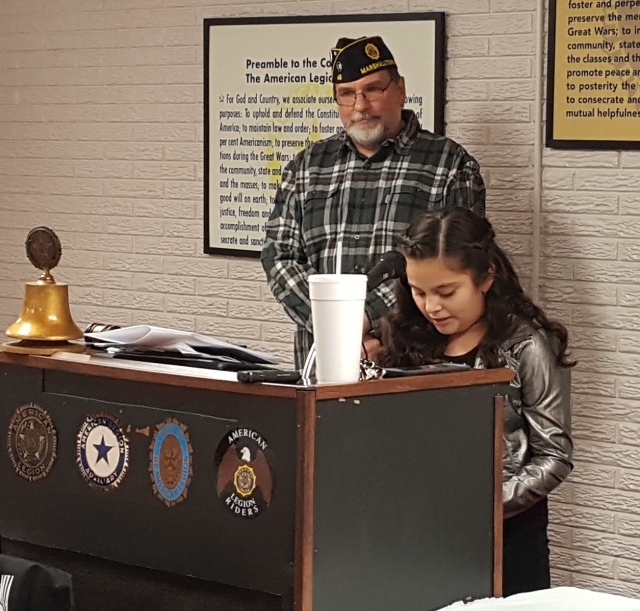 This is what the American Flag means to me. The colors represent a lot of it. Red for braveness and the blood of the people and soldiers who were making a difference for the American people. White for the purity and kindness. Blue for freedom and justice. I wish I could describe it better. Some people may think bad about the U.S flag but we will stand and defeat them and do whatever we can to stop them from crushing our land. Sometimes I sit down and ponder why people care so much about how others look, everyone’s the same but  everyone has their own talents,  personality and beliefs. I wish the world could be in peace where there is no  violence, terrorism, abuse, racism or anything like that! I think if the world was like that most people would be happy.  When I look at the U.S Flag I see history and all of the people who were taking a stand in history to make a difference so they would improve the UNITED STATES OF AMERICA.  AND that is what i see in the U.S Flag Justice, braveness, purity, freedom standing to improve doing the right thing to make it even a better place but some negative thoughts are still alive. I hope we can change that but all of us need to cooperate so we can make that happen and I think we can accomplish this if we try.  Did you know that the us flag had 15 stripes and in 1818 the congress declared that every time there was a new state they would add a star on the 4th of July. In conclusion the U.S Flag is a great place to live and it has a lot of superior benefits.

What the American Flag Means to Me

The current flag of the United States of America has 50 stars to represent the 50 states, and 13 stripes for the original 13 colonies.  The first version of the flag had 13 stars, and 13 stripes to represent the first 13 colonies.  I think the stars and stripes is a good design, I think it shows that the country is united as one, it shows that we don’t need to be separate because all the states, and back then, the colonies, work together.

There have been many different designs of the U.S. flag, I think the flag should always stay in its current style.  The U.S. flag is a very important symbol of the United States of America, I think it also symbolizes personal freedom.  I think this because in lots of other countries people can’t make their own decisions, the government is in control almost their whole life. We are very fortunate because we can be different and make our own individual choices.  I am happy because we get to celebrate our differences and that our flag shows these differences!