Bound for the U.S. Naval Academy

Posted on April 9, 2018 by marshalltownschools 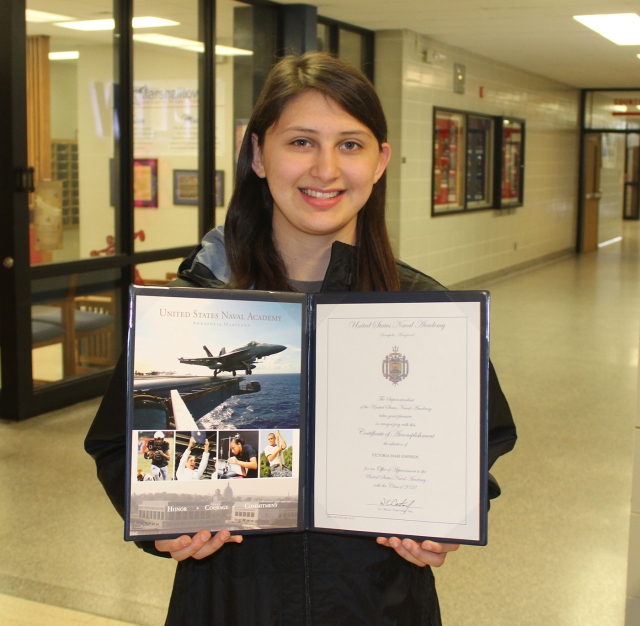 With every day she waited on a letter, Marshalltown High School senior Victoria Johnson thought her opportunity had passed for an appointment into the United States Naval Academy.

But, that fateful day finally came recently and she is now set to attend the academy in Annapolis, Maryland later this year.

“I was pretty excited,” Johnson said of receiving her appointment letter. “I had to read it twice to make sure.”

She said the Naval Academy has a 9 percent acceptance rate, so she wasn’t a shoo in even after being nominated by U.S. Sen. Charles Grassley and U.S. Congressman Rod Blum. She plans to study nuclear engineering, and she has already completed several college science courses at MHS.

“It’s always been a field I’ve been really interested in,” Johnson said of nuclear engineering.

From band to athletics to the National Honor Society, Johnson has been involved in a wide range of activities at MHS.

“Victoria demonstrates a strong commitment in every activity that she engages,” said MHS Principal Jacque Wyant. “Whether it is in band, athletics or her academics, Victoria devotes extra energy to reach the highest levels.  When I learned that Victoria had been granted an appointment, I was not surprised. She is an outstanding choice and a model representative from Marshalltown High School. I am elated for Victoria and her family. She will proudly follow in her parents’ footsteps as a member of the armed services.”

Her parents, Tim and Marsha Johnson, are both Army veterans and MHS teachers. So, no doubt, the question of  which is best Army or Navy will be an ongoing family debate.

“It’s kind of a nice rivalry going on,” Victoria said.

As part of her Navy experience, she is will serve for five years as a commissioned officer, but her thinking as of now is not to stop there.

“I plan to make it a career in the military,” she said.

She said military life appeals to her.

“You are working together on a team in an environment where everyone is expected to do their best and to help keep everyone safe,” Johnson said.

Victoria said school staff, people in the community and her family have helped her reach this goal.

“I would like to thank all of those who have helped me throughout the years,” she said.