Posted on February 27, 2019 by marshalltownschools 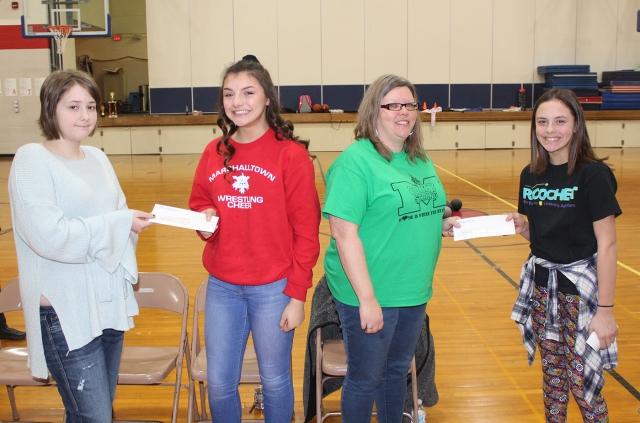 The Lenihan Intermediate School student leadership group Ricochet donated a total of $1,000 to two community projects during a special assembly on February 27.

The group donated $500 to the Animal Rescue League in the fund to honor Corey Brown and $500 to Splash 4 Life, which is seeking to get a splash pad in Marshalltown. Ricochet students raised $1,000 through the sale of kindness grams at the school and sales at the school’s concession stand.

Shelly Deal, director of the Animal Rescue League of Marshalltown, said they have raised nearly $20,000 in the Corey Brown Memorial Fund and they are still planning on what it will be used for to honor Corey.

“His memory will be kept alive here,” Deal said.

Receiving the donation for Splash 4 Life was Isabella Pantoja, whose brother Andres drowned in the Iowa River, among three others in the summer of 2012, which led to the splash pad effort.

“We’re going to keep supporting it until they get it built,” said Diane Simpson, a Lenihan teacher and a staff leader of Ricochet.