Professor on the cutting edge of technology

Posted on April 30, 2019 by marshalltownschools 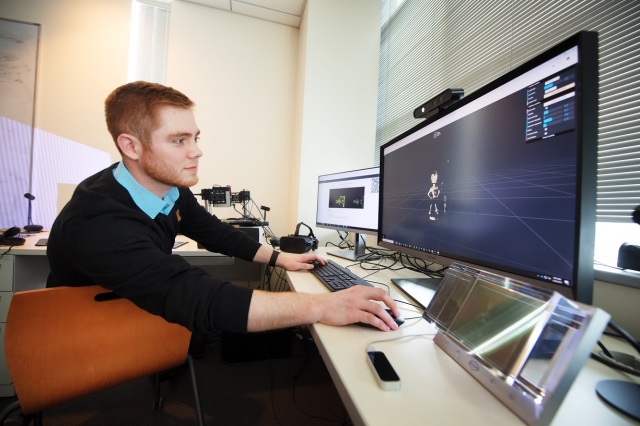 2010 MHS graduate an
Assistant Professor
at the University of Iowa

So much for the old adage that playing video games will never get you anywhere.

Just ask Tyler Bell, a 2010 Marshalltown High School graduate who is now Assistant Professor of Electrical and Computer Engineering at the University of Iowa.

He said a love of playing video games and learning how they worked and also his grandfather’s interest in computers spawned his own interest in the technology. That interest never waned.

“Thanks to my grandpa and video games, I always enjoyed playing with computers growing up,” Bell said. “My goal was to find a career that I could use computers and technology to help change lives.”

Life as Assistant Professor
In his current role as an assistant professor, Bell’s time is split between conducting research and teaching in the classroom at the University of Iowa.

“In my lab, we get to work on extending our scientific field while applying our research to solve real-world problems,” Bell said. “In the classroom I get to teach, interact with, and hopefully help inspire the next generation of engineers. I am very fortunate to call this my job.”

His research is on the cutting edge of technology.

“My current research focuses on 3D measurement, 3D communications, virtual reality, and augmented reality,” Bell said. “Although people often mention the research looks like ‘something out of Star Wars,’ I find the work interesting because it can also have real impact to society. For example, this research has been used for applications in forensic science, agriculture, medicine, entertainment, and the arts.”

Time at MHS
Bell said the Marshalltown Community School District has many outstanding teachers to help him build a foundation for his learning. One of those inspirational instructors that he pointed out is MHS math teacher Nancy Sills.

“Mrs. Sills inspired me not only with her teaching but also with the positive and enthusiastic attitude she brought into the classroom each day,” Bell said. “She is an excellent example of an educator that loves her job and truly cares about the success of her students.”

Sills, who still teaches at MHS, said Bell was a standout student.

“Tyler Bell was a wonderful student because he worked hard and cared about learning,” Sills said. “I knew that Tyler would be very successful and have an impact on the world.”

Earning three degrees
After MHS, Bell attended Iowa State University and received a bachelor’s degree in computer science in just two years thanks to college credit he earned while at MHS. He then earned a master’s degree in human computer interaction from ISU in 2014. While at ISU, he helped create a mobile app known as MyState which has been installed on tens of thousands of devices. Bell then went on to earn his doctorate in computer engineering from Purdue University in 2018.

“Without the opportunities provided by MHS, I would not have had the appropriate foundation to pursue these endeavors,” Bell said.