Posted on December 6, 2019 by marshalltownschools 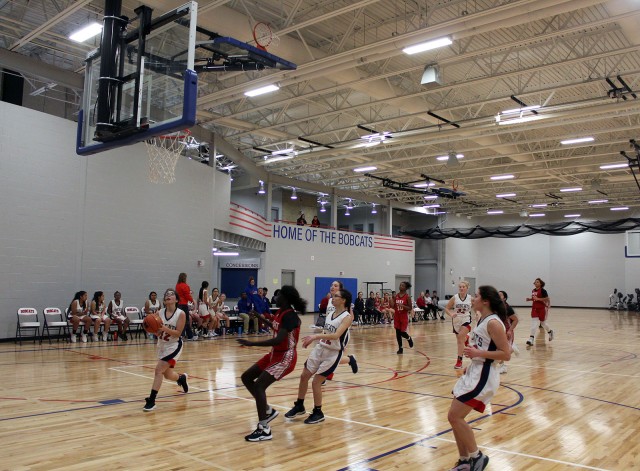 The Bobcats JV2 girls basketball team surges forward on the floor of the new auxiliary Roundhouse gym. Their game Friday was the first ever competitive basketball game in the new facility.

The Marshalltown Bobcats JV2 girls basketball team became a part of school history Friday evening as they faced Des Moines East in the new auxiliary gymnasium at the Roundhouse.

As the ball was tipped off, the first ever competitive basketball game in the new gymnasium began.

“It’s awesome,” said district Athletics and Activities Director Ryan Isgrig. “We already had a great facility in the Roundhouse, but to add a brand new gym right next to it is awesome.”

Before the new gym was installed, some of the basketball games were held at the Lenihan Intermediate School gym.

“Having everything in one building just logistically makes more sense,” Isgrig said. “We’ll have better crowds, people will be able to see all levels play.”

The gym, along with a new wrestling facility, were major pieces of the recently-completed Phase II of the Marshalltown High School Roundhouse project. The addition opened in the spring.