Posted on January 8, 2020 by marshalltownschools 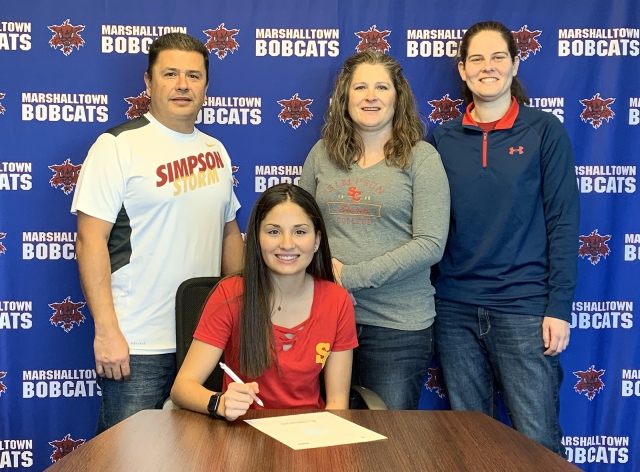 Marshalltown High School student Jade Tejada will be playing soccer in Simpson College Storm red and gold after she graduates from high school this spring.

Tejada signed a letter of intent to pursue her academic and athletic career at Simpson College Wednesday afternoon. She was joined by her parents and girls head soccer coach Stacy Galema at the signing.

“I picked Simpson because the atmosphere of the team is amazing,” Tejada said. “Not only are they great teammates, they are great people in general.”

With the upcoming soccer season included, Tejada is set to graduate as a four-year varsity member of the MHS girls soccer team. She has played multiple positions for the Bobcats, including as a goal-scoring striker, a savvy central midfielder and a tough central defender.

Galema said it has been a pleasure to coach Tejada over the years.

“Jade’s passion for soccer started from a young age. I personally began coaching her around the age of 10 at the soccer club,” Galema said. “In addition to playing, she has also been a coach for younger teams and has officiated for many years, helping grow her love for the Beautiful Game.”

Tejada said she has been playing soccer since she was 6 years old and is excited to be able to keep playing in coming years.