Posted on February 13, 2020 by marshalltownschools 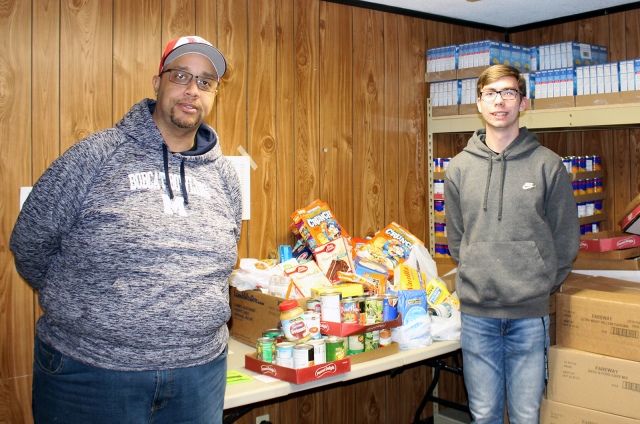 The Marshalltown High School Bobcats Bowling teams are experiencing an excellent season, and they have been collecting food items as part of an equally excellent community service effort.

“When I was visiting colleges and deciding where to go next year, one college I visited was having a little competition with their teams for a canned food drive,” Kramer said. “I thought that was a good idea, so I pitched it to Coach (Wilder) and he thought it was a good idea, too.”

Kramer set up the food drive as a competition between the boys and girls bowling teams to see who could collect more food. Ultimately, Wilder said the contest was a virtual tie.

“We both kind of eyeballed it and I said ‘I can’t call it either way.’ So as the coach I have to declare both of them winners,” Wilder said with a smile.

Both the boys and girls teams have impressive 9-2 records so far this season. They have their sights set high going into Friday’s CIML Conference meet at 10 a.m. in Fort Dodge. That meet was initially supposed to take place Thursday.

The Bobcats will look to qualify for state-level play next Tuesday, Feb. 18 as they host the district meet at Wayward Social. The meet is set to start at 10 a.m. that day.