Posted on February 18, 2020 by marshalltownschools

MHS students Valeria Becerra, left, and Zach Vazquez, right, take a look at a piece of equipment at the Emerson Innovation Center Tuesday.

It was a day of exploring career interests for more than two dozen Marshalltown High School junior and senior students Tuesday.

The group visited the Emerson Innovation Center to learn about the myriad engineering career opportunities offered by the company. Emerson is one of Marshalltown’s largest employers and is a global corporation that creates advanced valves for a variety of industries.

“My favorite part was probably the materials demonstration,” said MHS junior Carlye Castillo. “I learned more about it, and that was one of the types of engineering I was most thinking about.”

Carlye said she was intrigued by the many different types of engineers working at Emerson.

Fellow junior Jordan May said she is especially interested in pursuing a career in chemical engineering. She said she learned about the kind of involved work that goes into creating Emerson’s products.

“There are a bunch of calculations that go into programming each and every design,” Jordan said. 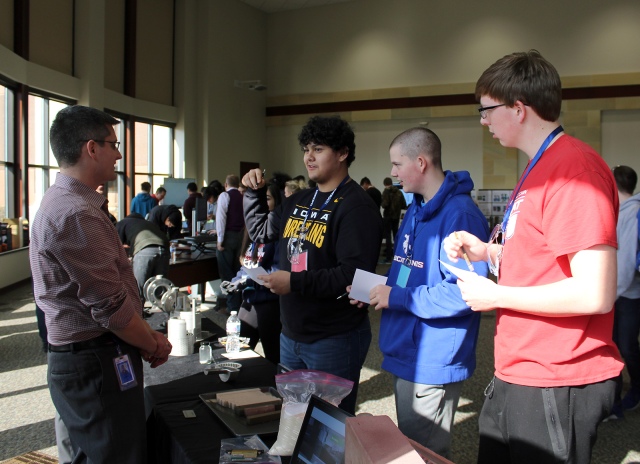 MHS junior Drake Stalzer said he is interested in a career in engineering, though he does not yet know which exact path he wants to take in the field. He said he was especially impressed by the global reach of Emerson, which has locations across several continents.

“They go to different countries and they get to work on stuff in those countries,” Drake said.

Students got to hear about careers from engineering staff, including those employees’ formal education and why they took a particular path within engineering.